100 Posts, Dream Double Features and a Small Cinema in Bellagio

My 100th post seems an appropriate time to talk about One Fine Day. Along with Addicted to Love it’s the film I’ve mused over more than any other. I actually happened across it on Saturday while switching channels. Michelle drew me in again. Another day dreaming of 1997, another dose of Pfeiffer pfixation.

Do you remember the incredible cinematic year that was 1997? It was the year of Con Air, The English Patient, My Best Friend’s Wedding, L.A. Confidential, Anaconda, the list goes on. As much as I revelled in these celluloid discoveries, what I most wanted to do was go to the theatre and gaze at Michelle Pfeiffer for two hours. On that level, One Fine Day was a must see for me. 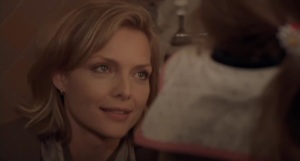 It wasn’t a must see for everyone, and seemed to vanish from theatres all too quickly. The brevity of One Fine Day‘s theatrical run was made even more disappointing because it coincided with the even shorter run of Addicted to Love, Maggie being outdrawn by the Pfeiffer flick for most of her month long release.

Each films arrival on the big screen however coincided with a trip to Lake Como, where, for some mystifying reason, my beautiful girlfriend did not want to take a break from wine-drinking, pasta-eating and trattoria-sitting to watch subtitled screenings of Addicted to Love and One Fine Day at the Cinema Vittoria.

Two weeks later the fates actually did conspire to grant me the opportunity for a Meg & Michelle multiplex double feature. So what am I trying to say? I miss that feeling. The moments just before you go to the cinema, the butterflies when the opening titles roll. Thank you, Meg and Michelle for giving me that feeling of anticipation. I doubt I’ll ever feel like that again, but it was nice while it lasted.

14 responses to “100 Posts, Dream Double Features and a Small Cinema in Bellagio”